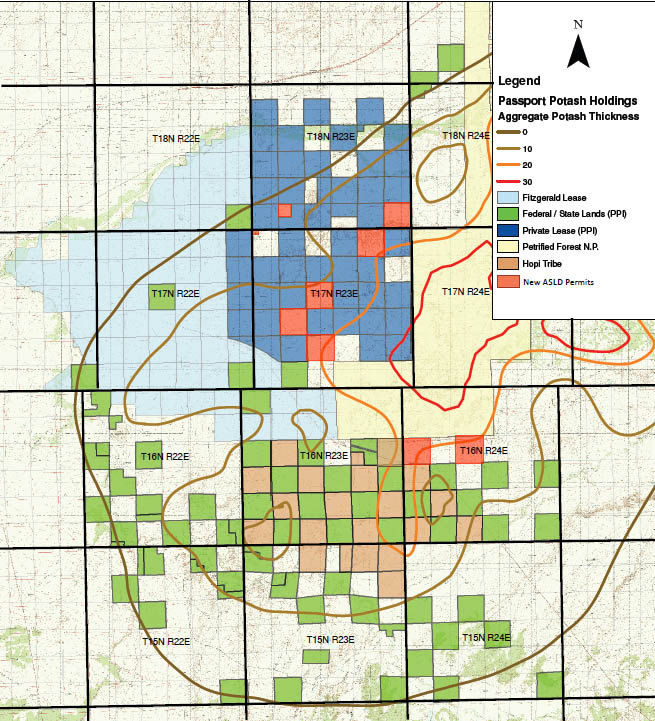 Passport Potash Inc. (“Passport” or the “Company”) is pleased to report that it has received approval for nine new exploration permits (“Permits”) from the Arizona State Land Department (“ASLD” or the “Department”), adding 4,703.66 acres of State trust land to Passport’s land package. The Permits are on State Trust land sections that had been closed to development related to the proposed expansion of the Petrified Forest National Park, and are strategic to Passport’s mine development. Seven of the sections lie within Passport’s private landholdings, while the other two border the Passport/Hopi development area and abut the south border of the Park.

In early April 2013, Passport made a request to the ASLD Commissioner to open these nine sections to mineral exploration. On April 30, 2013, the Commissioner issued an order (Order No. 153-2012/2013) (the “Order”), finding that an “acceptable use has been proposed for the State Trust land” and opening the subsurface estate for the land to mineral exploration application. Passport submitted applications for the Permits on the day of the Order and received confirmation shortly thereafter that the Permits had been approved. Passport expects to shortly submit an exploration plan for these sections, and expects to perform the work necessary to include these sections in its anticipated upcoming application for a mining lease.

Passport Potash President and CEO, Joshua Bleak, commented: “We are very pleased with the action of the ASLD, and the speed with which Commissioner Vanessa Hickman made a decision to free up these lands for potential potash development. It is a testament to the strength of the Commissioner and her team, particularly in the minerals section, that they recognized the significant value these lands would provide to the State Trust for decades to come, which we believe is evidenced by the speed with which a decision was made. The Department has always indicated that they are supportive of potash development in the Holbrook Basin, and this action evidences that support.”

About the Holbrook Potash Project

Passport Potash Inc. is a publicly traded corporation engaged in the exploration and development of advanced potash properties with its major focus on a previously explored potash property in Arizona. Passport has acquired a strategic position in the Holbrook Basin with land holdings encompassing over 125,000 acres. Passport has also entered into a joint exploration agreement with the Hopi Indian Tribe to work toward developing about 13,000 acres of contiguous privately held Hopi land.

About the Arizona State Land Department

The primary and continuing goal of the Arizona State Land Department is to increase revenue for the beneficiaries of State Trust Land and to protect its long term interest. In FY 2012 and the first half of FY 2013 the Department generated over $430,000,000 for Trust land beneficiaries, primarily K-12 education. As the economy continues to strengthen, the Department looks forward to increasing opportunities to generate revenue and contribute to the continuing success of the State of Arizona. For more on the Arizona State Land Department clickhttp://www.azland.gov.

On behalf of the Board of Directors

EXCEPT FOR THE HISTORICAL INFORMATION PRESENTED HEREIN, MATTERS DISCUSSED IN THIS NEWS RELEASE CONTAIN FORWARD-LOOKING STATEMENTS THAT ARE SUBJECT TO CERTAIN RISKS AND UNCERTAINTIES THAT COULD CAUSE ACTUAL RESULTS TO DIFFER MATERIALLY FROM ANY FUTURE RESULTS, PERFORMANCE OR ACHIEVEMENTS EXPRESSED OR IMPLIED BY SUCH STATEMENTS. STATEMENTS THAT ARE NOT HISTORICAL FACTS, INCLUDING STATEMENTS THAT ARE PRECEDED BY, FOLLOWED BY, OR THAT INCLUDE SUCH WORDS AS “ESTIMATE”, “ANTICIPATE”, “BELIEVE”, “PLAN” OR “EXPECT” OR SIMILAR STATEMENTS ARE FORWARD-LOOKING STATEMENTS. RISKS AND UNCERTAINTIES FOR THE COMPANY INCLUDE, BUT ARE NOT LIMITED TO, THE RISKS ASSOCIATED WITH MINERAL EXPLORATION AND FUNDING AS WELL AS THE RISKS SHOWN IN THE COMPANY’S MOST RECENT ANNUAL AND QUARTERLY REPORTS ON FORM 10-K OR FORM 10-Q AND FROM TIME-TO-TIME IN OTHER PUBLICLY AVAILABLE INFORMATION REGARDING THE COMPANY. OTHER RISKS INCLUDE RISKS ASSOCIATED WITH THE REGULATORY APPROVAL PROCESS, COMPETITIVE COMPANIES, FUTURE CAPITAL REQUIREMENTS AND THE COMPANY’S ABILITY AND LEVEL OF SUPPORT FOR ITS EXPLORATION AND DEVELOPMENT ACTIVITIES. THERE CAN BE NO ASSURANCE THAT THE COMPANY’S EXPLORATION EFFORTS WILL SUCCEED AND THE COMPANY WILL ULTIMATELY ACHIEVE COMMERCIAL SUCCESS. THESE FORWARD-LOOKING STATEMENTS ARE MADE AS OF THE DATE OF THIS NEWS RELEASE, AND THE COMPANY ASSUMES NO OBLIGATION TO UPDATE THE FORWARD-LOOKING STATEMENTS, OR TO UPDATE THE REASONS WHY ACTUAL RESULTS COULD DIFFER FROM THOSE PROJECTED IN THE FORWARD-LOOKING STATEMENTS. ALTHOUGH THE COMPANY BELIEVES THAT THE BELIEFS, PLANS, EXPECTATIONS AND INTENTIONS CONTAINED IN THIS NEWS RELEASE ARE REASONABLE, THERE CAN BE NO ASSURANCE THOSE BELIEFS, PLANS, EXPECTATIONS OR INTENTIONS WILL PROVE TO BE ACCURATE. INVESTORS SHOULD CONSIDER ALL OF THE INFORMATION SET FORTH HEREIN AND SHOULD ALSO REFER TO THE RISK FACTORS DISCLOSED IN THE COMPANY’S PERIODIC REPORTS FILED FROM TIME-TO-TIME WITH THE UNITED STATES SECURITIES AND EXCHANGE COMMISSION.

THIS NEWS RELEASE HAS BEEN PREPARED BY MANAGEMENT OF THE COMPANY WHO TAKES FULL RESPONSIBILITY FOR ITS CONTENTS. NONE OF FINRA, THE SEC NOR THE BRITISH COLUMBIA SECURITIES COMMISSION HAS APPROVED OR DISAPPROVED OF THE CONTENTS OF THIS NEWS RELEASE. THIS NEWS RELEASE SHALL NOT CONSTITUTE AN OFFER TO SELL OR THE SOLICITATION OF AN OFFER TO BUY NOR SHALL THERE BE ANY SALE OF THESE SECURITIES IN ANY JURISDICTION IN WHICH SUCH OFFER, SOLICITATION OR SALE WOULD BE UNLAWFUL PRIOR TO REGISTRATION OR QUALIFICATION UNDER THE SECURITIES LAWS OF ANY SUCH JURISDICTION.